Future Terraforming Of Venus.  Do People Live on Venus In The 33rd Century 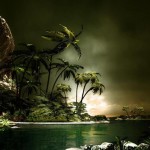 With the completion of the Mars Terraforming Project in the early 25th century the much more difficult task of terraforming Venus began.  A project projected to take at least 1000 years to complete with technology at the time.  Further advances in technology along the way allowed Venus to become a human habitable planet by the mid 28th century.  This was no small feat considering Venus was an oven hot hell planet with an average temperature over 800 degrees Fahrenheit.   It also featured violent storms, bone crushing pressure, and an atmosphere of carbon, and sulfur dioxide that produces sulfuric acid rains.  Venus, the hottest planet in our solar system due to the close proximity of the sun, and a thick atmosphere, was a dry rocky acidic desert laden with volcanic activity.

In the 33rd century Venus is no longer the hell planet but the paradise planet that features vast tropical rainforest like regions of lush vegetation along with warm beach lined oceans under partly cloudy skies.  Although fully cloudy skies are common mid-day as they are manufactured by advanced weather control systems to help reflect the sun.  At night skies are almost completely freed of cloud cover to allow excess heat to escape into space.  This allows for beautiful viewing of the stars, and other celestial sights.  Thankfully it does not rain all the time like a rainforest.

The tropical zones are located around most of the planet except for a zone at the Equator that is all desolate desert too hot to support life.  The north, and south poles are sub-tropical regions akin to Florida’s summer temperatures, flora, and fauna.  That is why the poles are the top vacation resort regions where temperatures rarely fall below 70 degrees Fahrenheit at night, and are usually at least well above 85 by day.  There are no temperate, or frigid zones of snow.  Although snow does take place higher in the atmosphere where it’s cooler.  There are no seasons due to no significant axis tilt.  Just perpetual tropical summer with variations in rain.  Thunderstorms are suppressed by global weather control technologies.  Only light to moderate rains fall in inhabited areas of Venus. 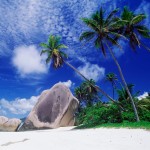 atmosphere including the toxic sulfurs, and cooling the surface while introducing oxygen, and water.  Weather control grids already used on Earth, and Mars had a huge hand in this effort.  In addition the planets rotation was increased substantially to eliminate the long day, and night that lasted 243 Earth days.  Now a day on Venus is 36 hours in length.  A magnetic field was also generated to protect the surface from solar, and cosmic radiation as is the case on Earth.  Once these tasks were completed the planet was rapidly seeded with plant, and animal life from Earth. Many of which were genetically engineered so they were more suited to life on Venus.  Plant growth was sped along courtesy of quadrillions of microscopic nanobots, genetically engineered bacteria, microbes, and tiny cellular constructing cyborgs.  These elements also helped in cloning animals for quick spreading about the planet.

Venus has four contents along with a plethora of tropical islands but most of the surface is now composed of vast oceans that are the dreams of boating, and sailing enthusiasts everywhere.  Yes people still enjoy taking to the high seas in the 33rd century for sport, and recreation.  The four Venusian continents are called:

All named after love gods, and goddesses From Earth mythology in keeping with the name of Venus itself.  There are also a number of villages, towns, and cities on Venus including the Capital called Cupid City located on the Continent of Aphrodite.  Most of the communities, including Cupid City, are on ocean shores for maximum vacation value.  People from all around the Milky Way Galaxy, and beyond come to visit Venus, and unique climate regional, and historical variety of Earth.

By the 33rd century no longer is Earth the only place to live in our Solar System.  We consider Earth the iridescent kaleidoscope of the planets with all it’s varied climate zones, and biomes.  Venus is the tropical planet while Mars is the temperate planet.  Europa is the Arctic Moon with our own Moon being the home of several dome cities each having a unique habitat all it’s own.  Beyond our own star, and galaxy system many planets have been found flourishing with life along with humanity terraforming throughout the galaxies as well.  Worries of Earth’s over population never came to pass since humanity acquired the ability to live off world at the right moment in history!